Where to begin. Since our launch in late 2018, HeyBryan has seen rapid growth across Canada – through a combination of passion, product development, and marketing campaigns. From a combination of tiny budget and big ideas, we’ve experimented with almost all forms of communication. There's been a focus predominantly on digital executions (social media, email campaigns, and digital advertising), with some ATL (newspaper ads, billboard ads, and flyers) in the mix too.

Creative director. Managing, directing and leading the development of our brand and all creative marketing executions. 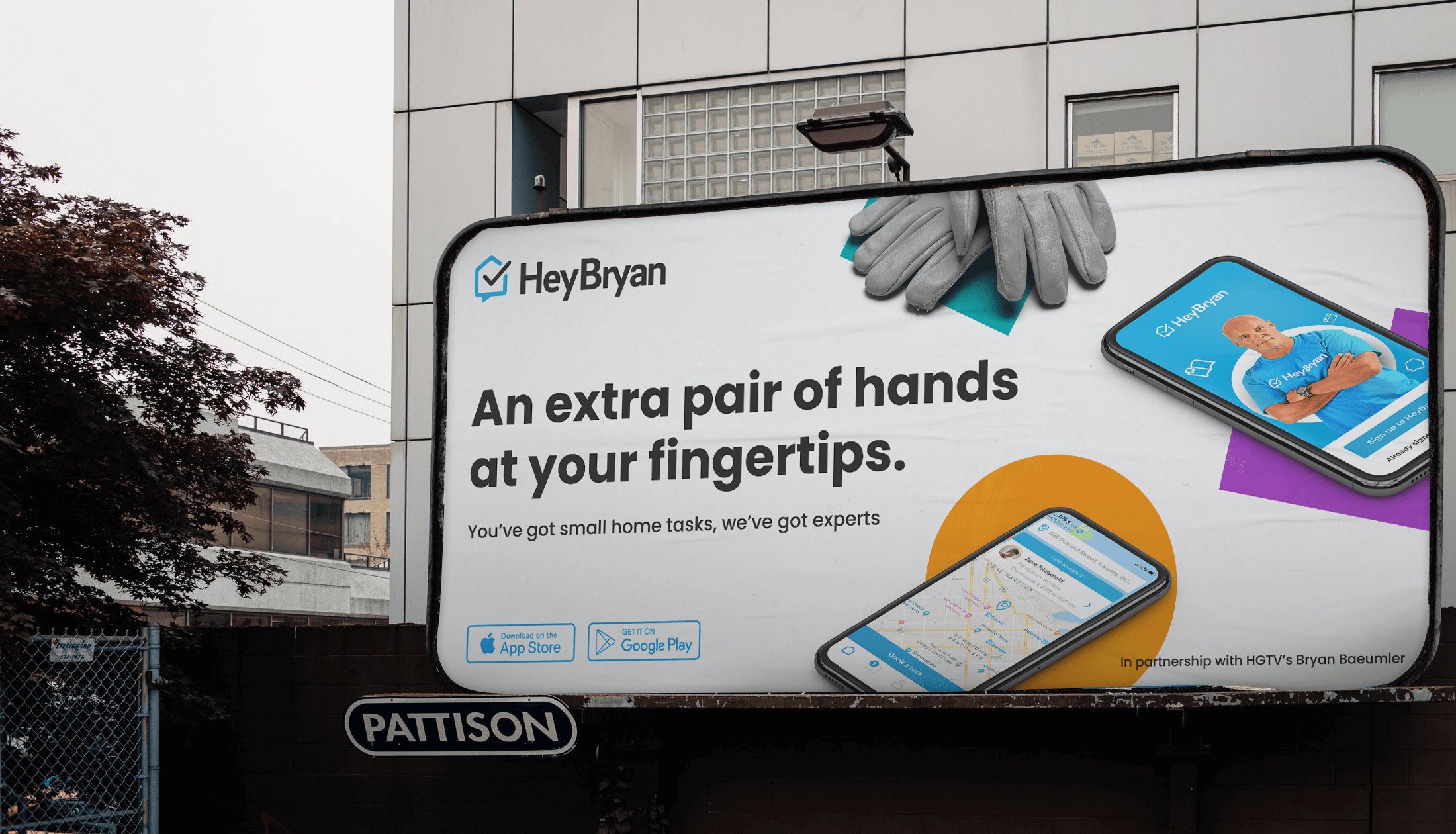 We have Bryan Baeumler (TV personality) and a great idea - go from there. Learning as we go, address the potential market (anyone who lives in a home) and appeal to what motivates them to book a task. As we’re a two-sided marketplace we also need to advertise and appeal to those who execute on the tasks themselves: The handyfolk who work in skilled or unskilled trades.

There were two distinct routes we could take: advertise to everyone and test what worked, or look into who actually wanted our product. Turns out, both methods could return results. The core takeaways were that we needed to identify the true motivations behind booking tasks. Those motivations sat in two buckets: people who could do the task but lacked the time or inclination, and people who lacked the skills to complete the task itself. 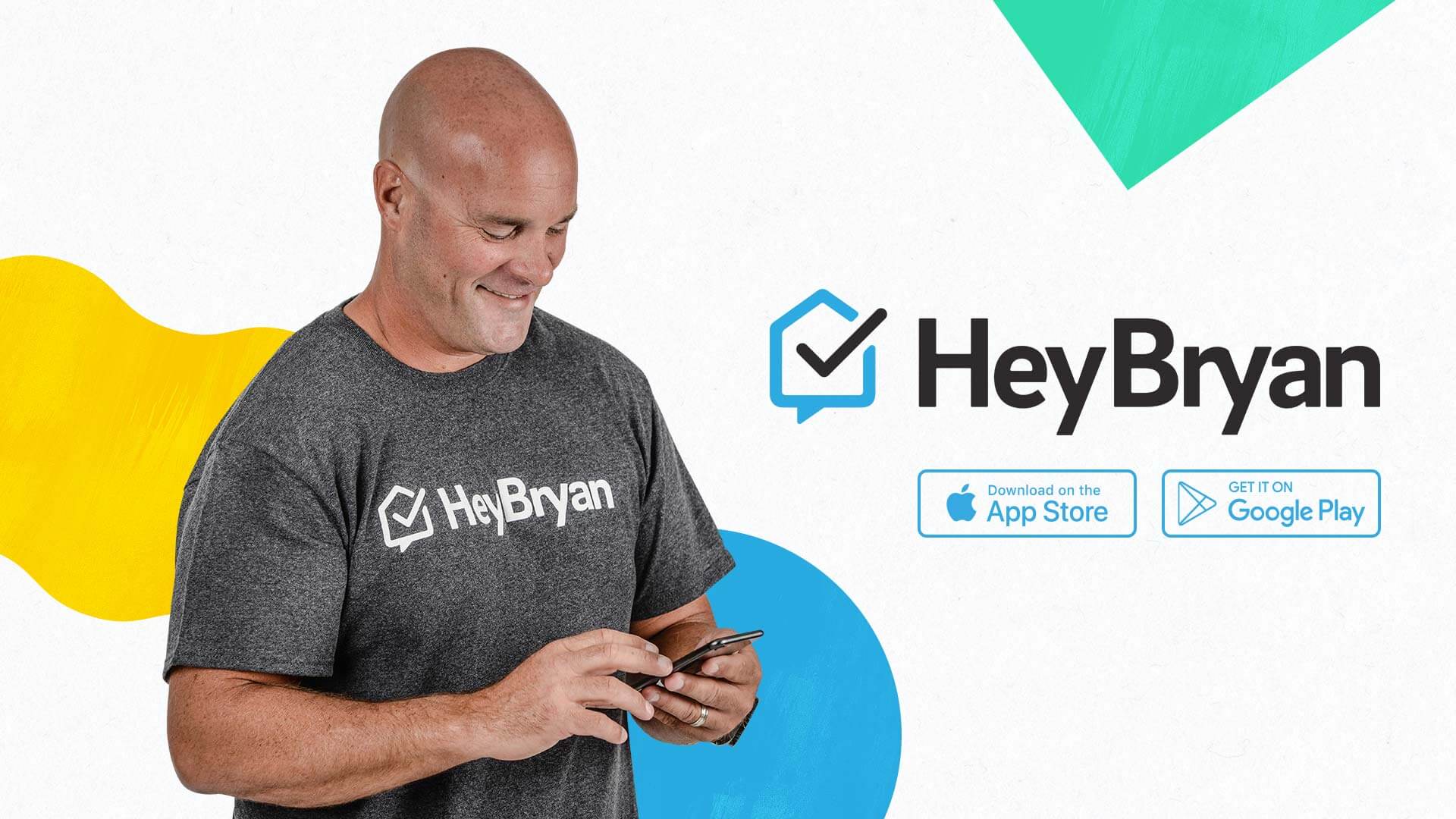 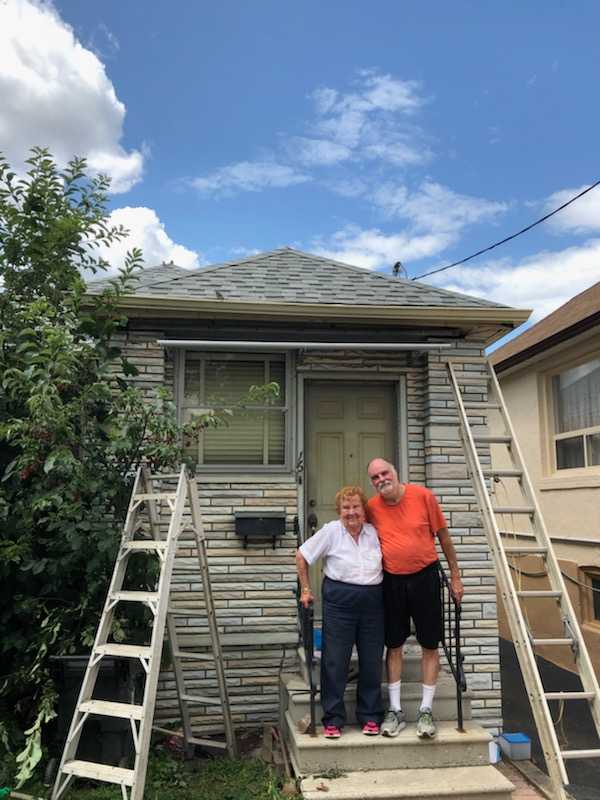 The industry HeyBryan occupies is very dry in execution. It places focus primarily on the task itself and is very action orientated. There is very little ‘why’ involved, and that risks dehumanising a very personal interaction. HeyBryan is asking customers to invite an unknown entity into their house and work on their most personal possession: their home.

Our creative executions focus on the reality of the situation. What is the real reason you book a task? Is it simply to fix your oven, or is it because you have family coming round for thanksgiving and you’re terrified the turkey won’t be cooked correctly?

By bringing personality and human behaviour into our messaging, we also bring humour and reality to the situation. This approach worked similarly for the handyfolk (experts) who do the jobs. By speaking to those who sign up to do the work, we quickly found that among the many reasons they signed up, it was the freedom of time to spend doing what they truly want that mattered most.

Work when you want, earning the money you choose, to spend time doing what matters. 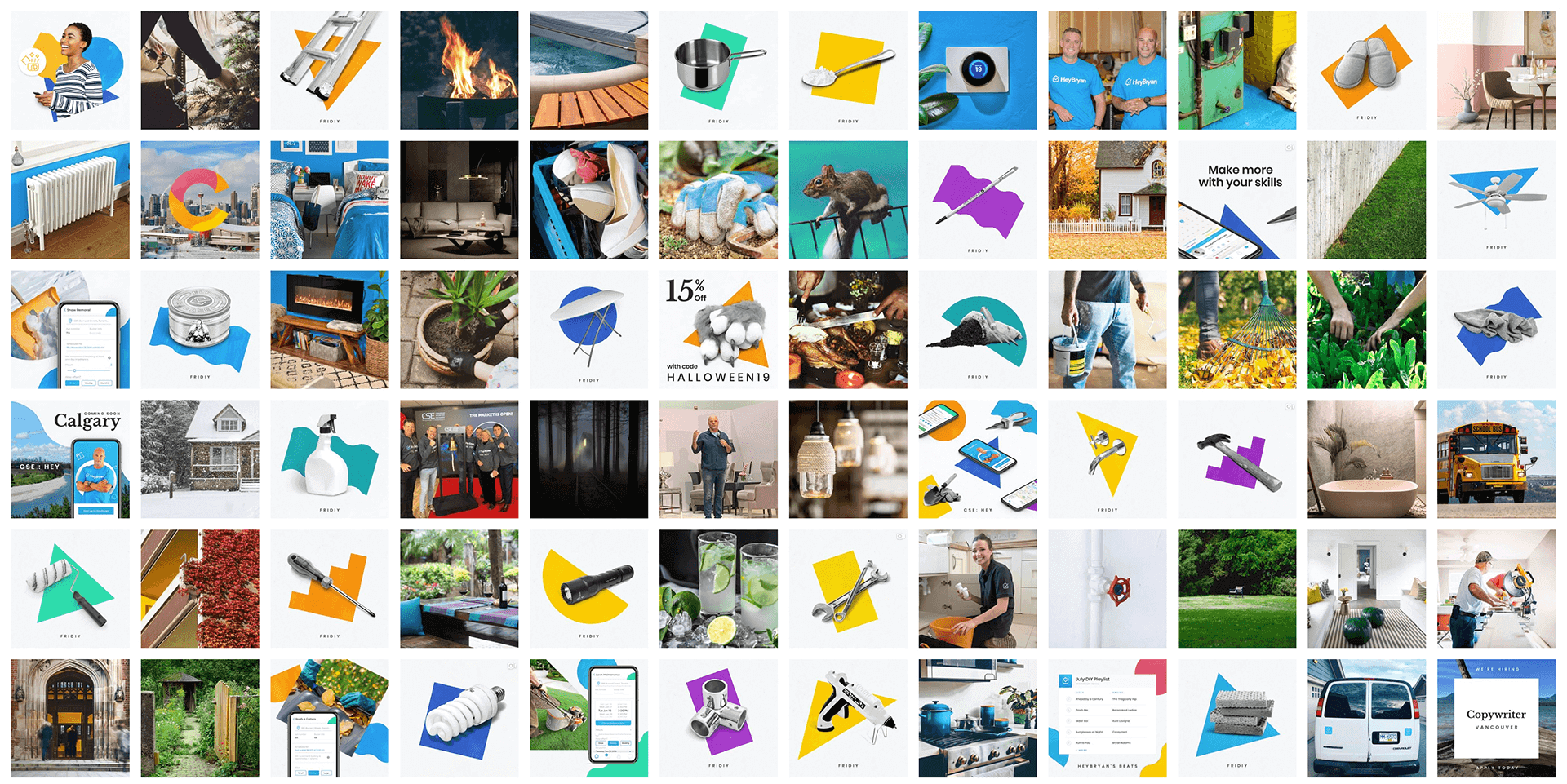 HeyBryan had a newspaper takeover campaign across both Vancouver and Toronto, with front and full-page ads run throughout late 2019.

With a large number of ads created, we had the opportunity to have some fun with our messaging and stories. Crafting a defined ‘template’ for our ads with key visual metaphors, we were able to rapidly create a series of ads that all felt discernibly ‘HeyBryan’.

In addition to the top crown adverts, we also had the opportunity to design and write 3 full pagers. With print, we had the luxury of time and took advantage of that fact. Telling a story with our creative increased the connection between our customers and brand - with a bit of humour thrown in for good measure.

For results, it’s always difficult to quantify real-world impact over digital data. However, during this time we saw a huge increase in brand awareness, as well as a dramatic shift in sign-ups. Overhearing a conversation in a coffee shop about our ads is always the best feeling you can get! 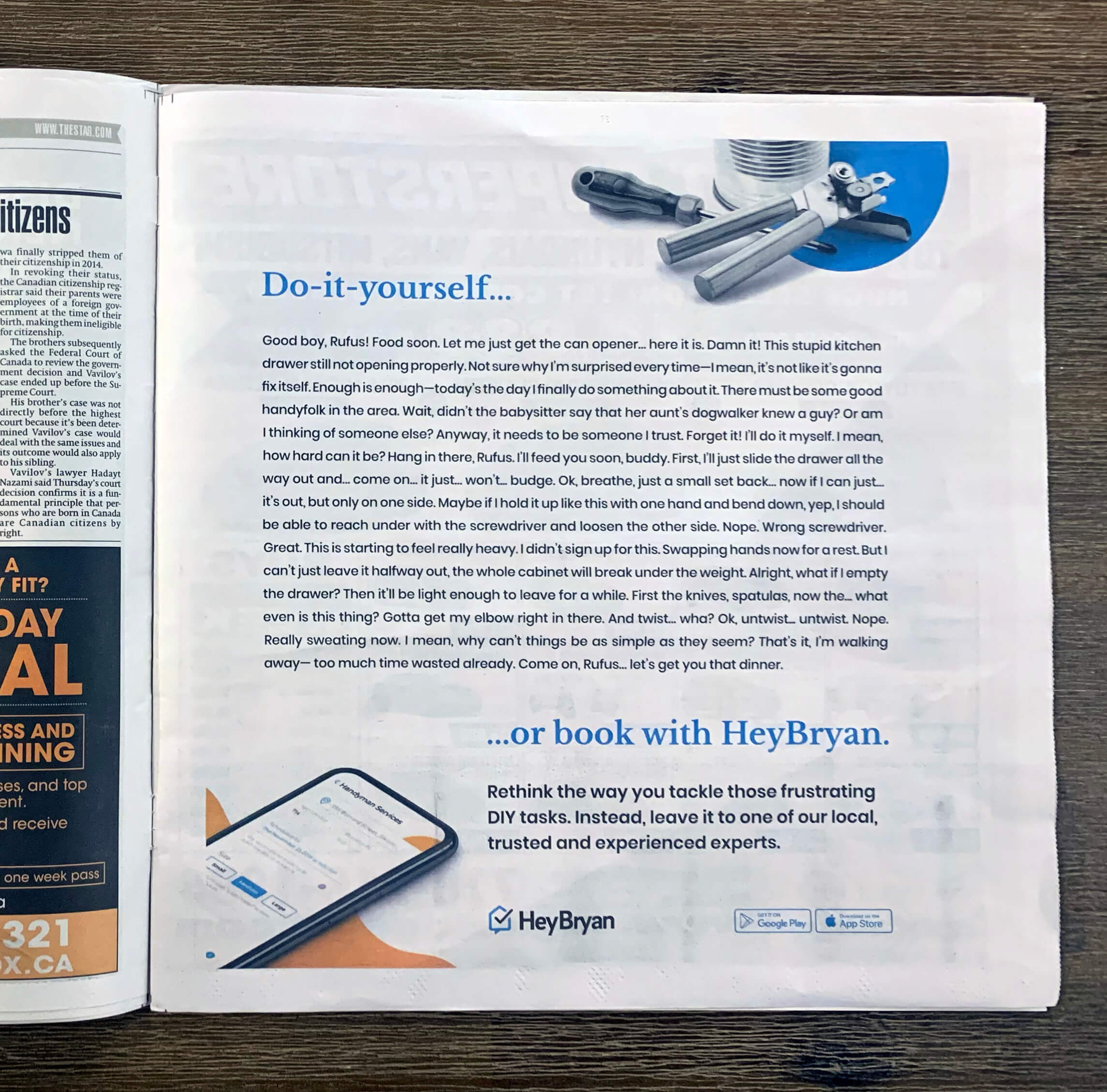 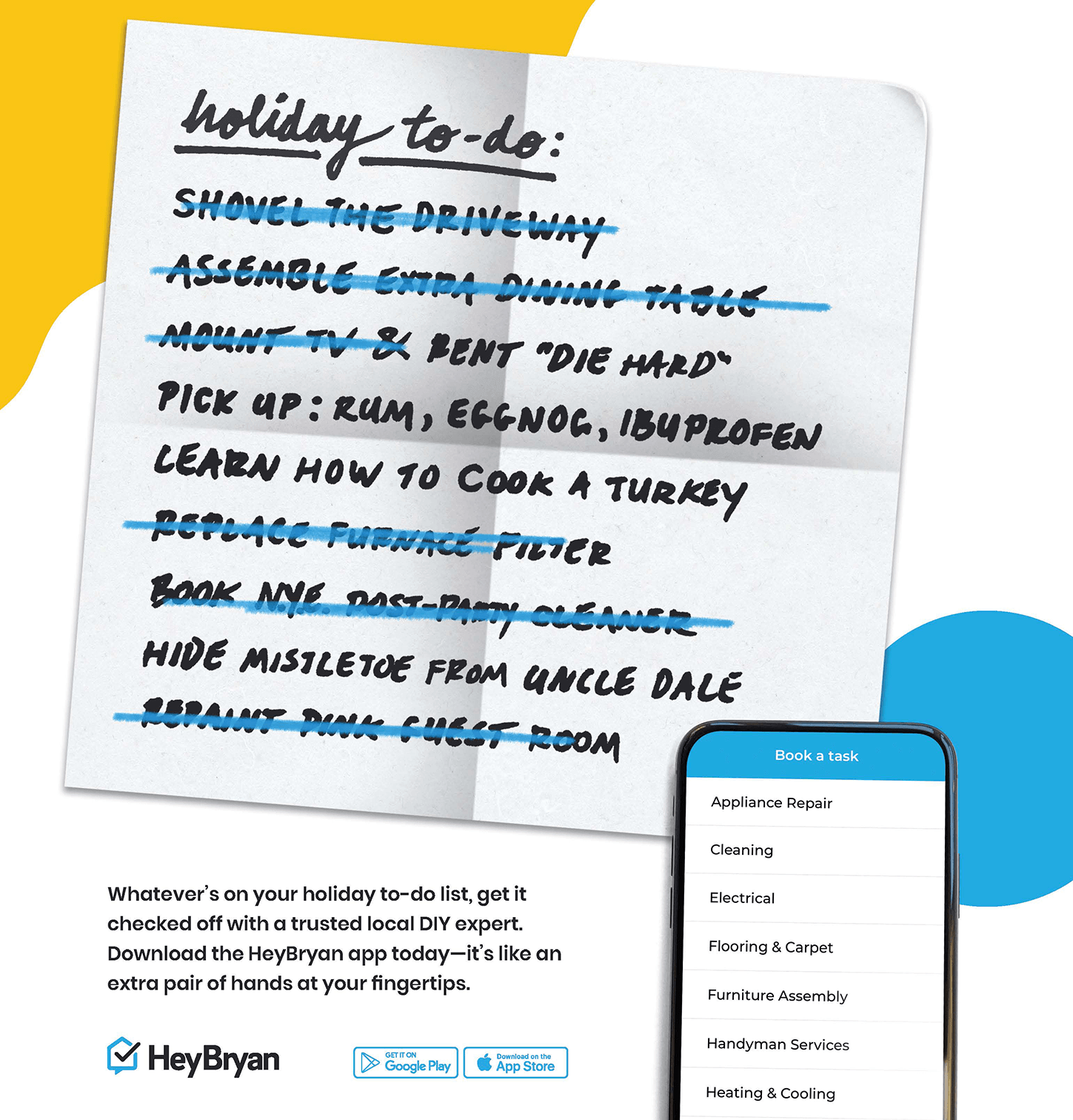 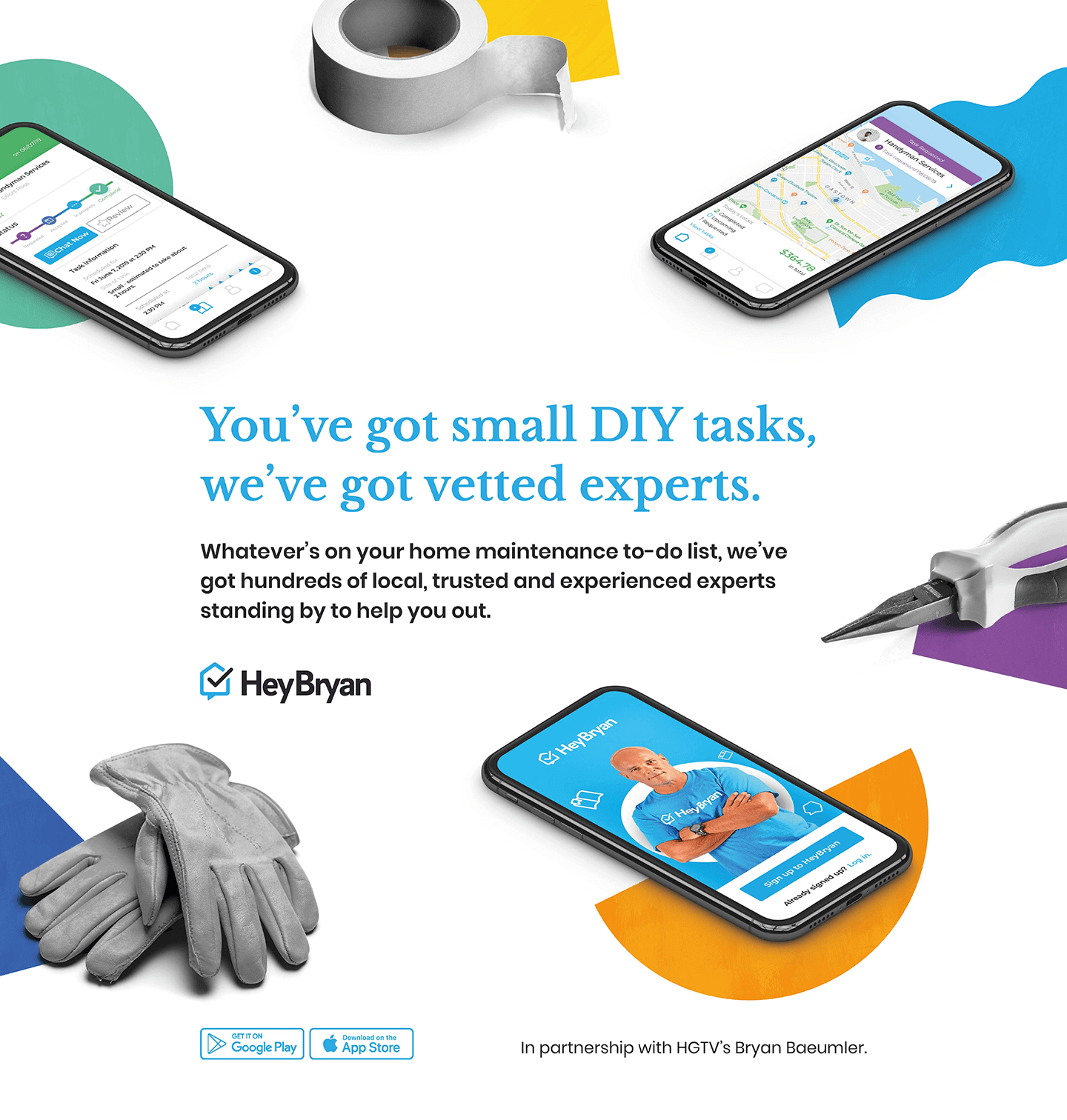 Facebook and Instagram have been our most successful and prominent platforms for advertising thus far. While the jury is still out regarding Facebook’s mythical black box algorithm - working from a base audience and consistently tweaking copy/imagery over time has helped create a consistently successful customer and expert acquisition model.

Keep the message simple, use our shapes and of course, Bryan. We concentrate on drilling down into what the customers may need and why they should sign up and get the job done.

One of our most recent and successful campaigns have been beautifully simple in their execution. With the joint challenge of minimal budget and finding time with Bryan Baeumler’s incredibly hectic schedule - we looked at how best to create valuable content. People understand the world of ads now more than ever and know when they’re being advertised to.

To counter this I looked at how we could create something ‘real’. Bryan is a likable ‘normal’ person. Someone who our customers listened to and feel comfortable with. In devising simple scripts and presented in an offhand manner - we successfully created a campaign that felt very real and organic. 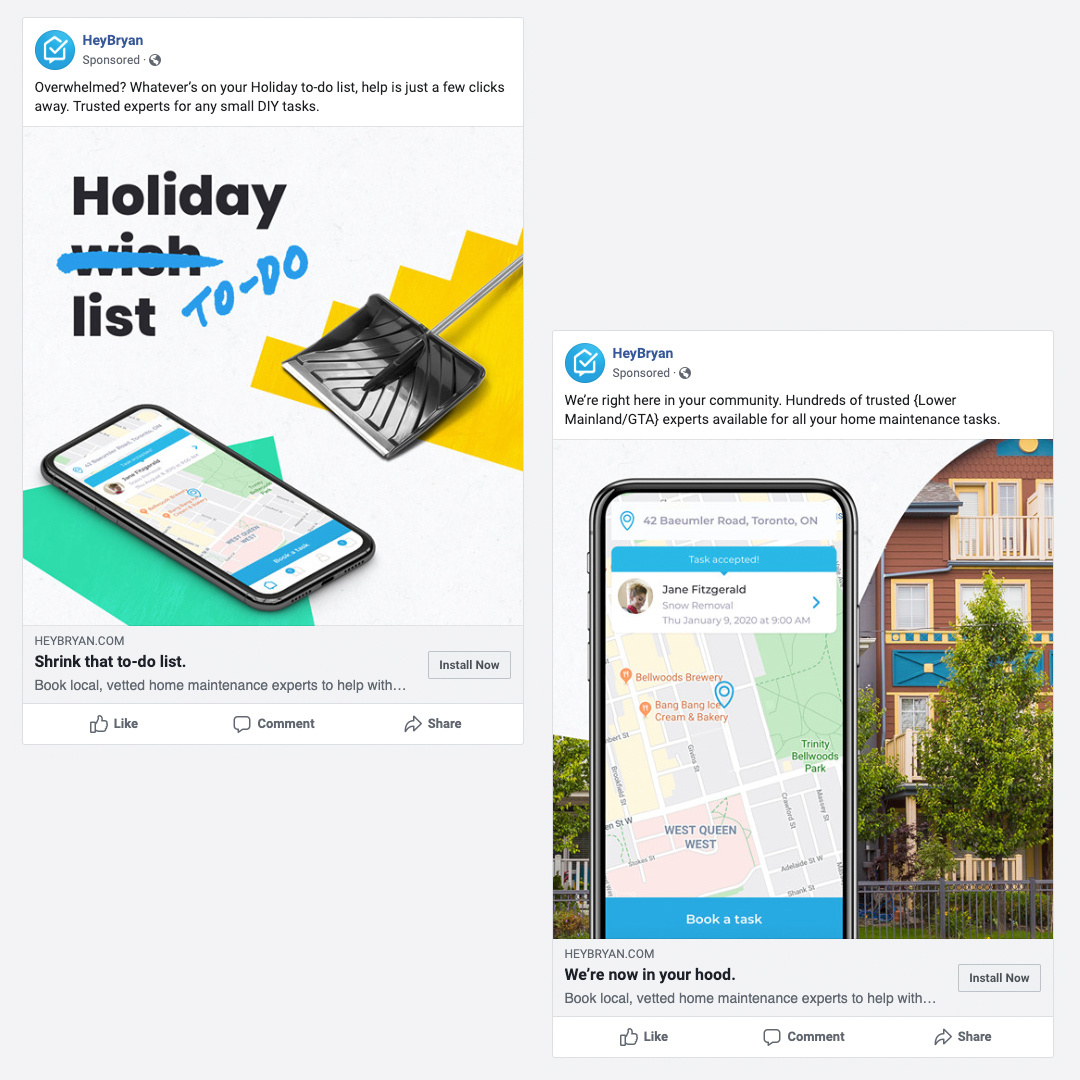 Transitioning from handcrafting and building each individual email to constructing a comprehensive automated drip onboarding campaign has been a great shift for the business.

As with most start-ups, we began with unscalable solutions that rapidly became unsustainable. Creating an onboarding campaign for our customers and experts has resulted in far less groundwork and far more informed and productive users.

A brief to take our new company and get people not only signing-up but excited about our brand has been one of the greatest professional challenges I’ve undertaken thus far in my career. 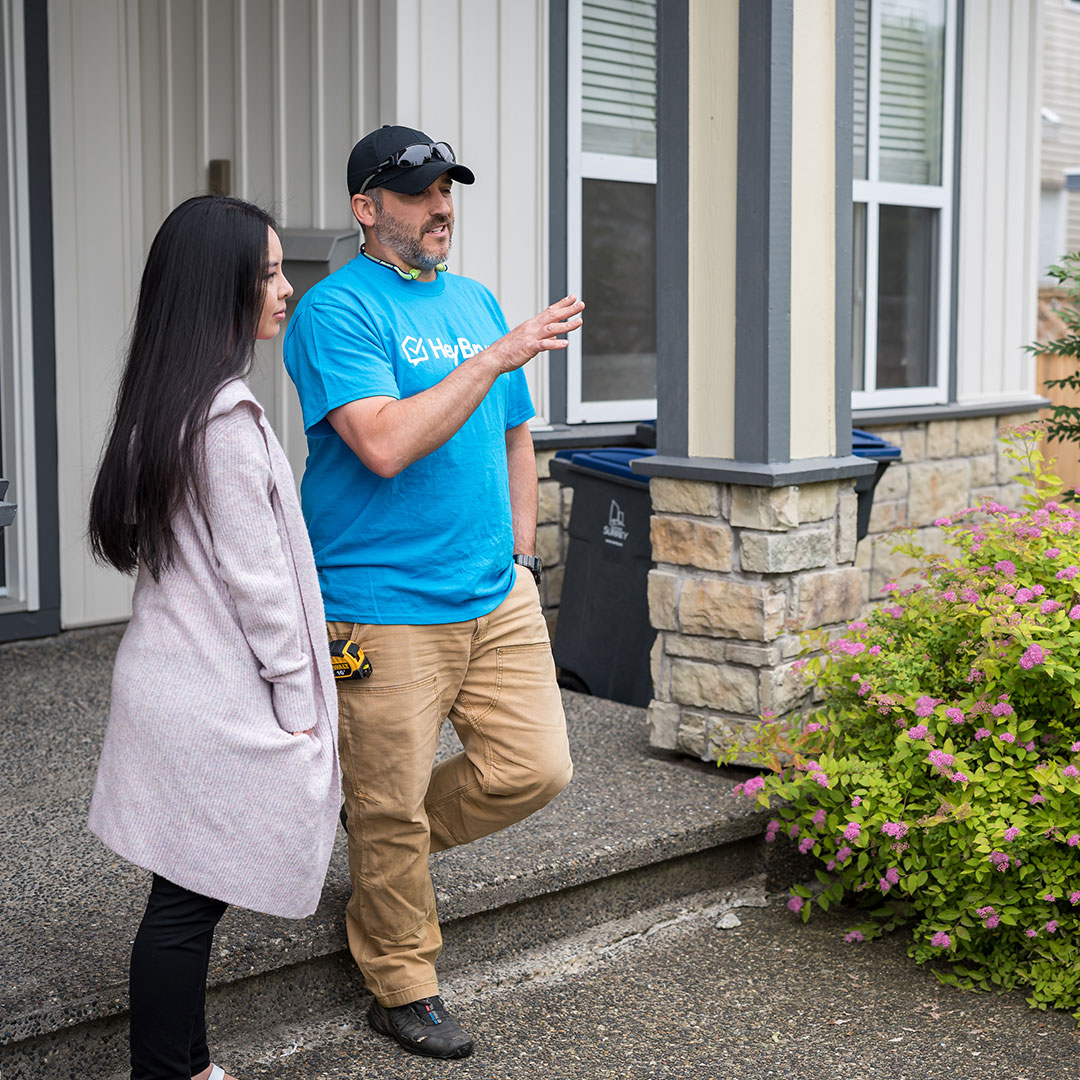 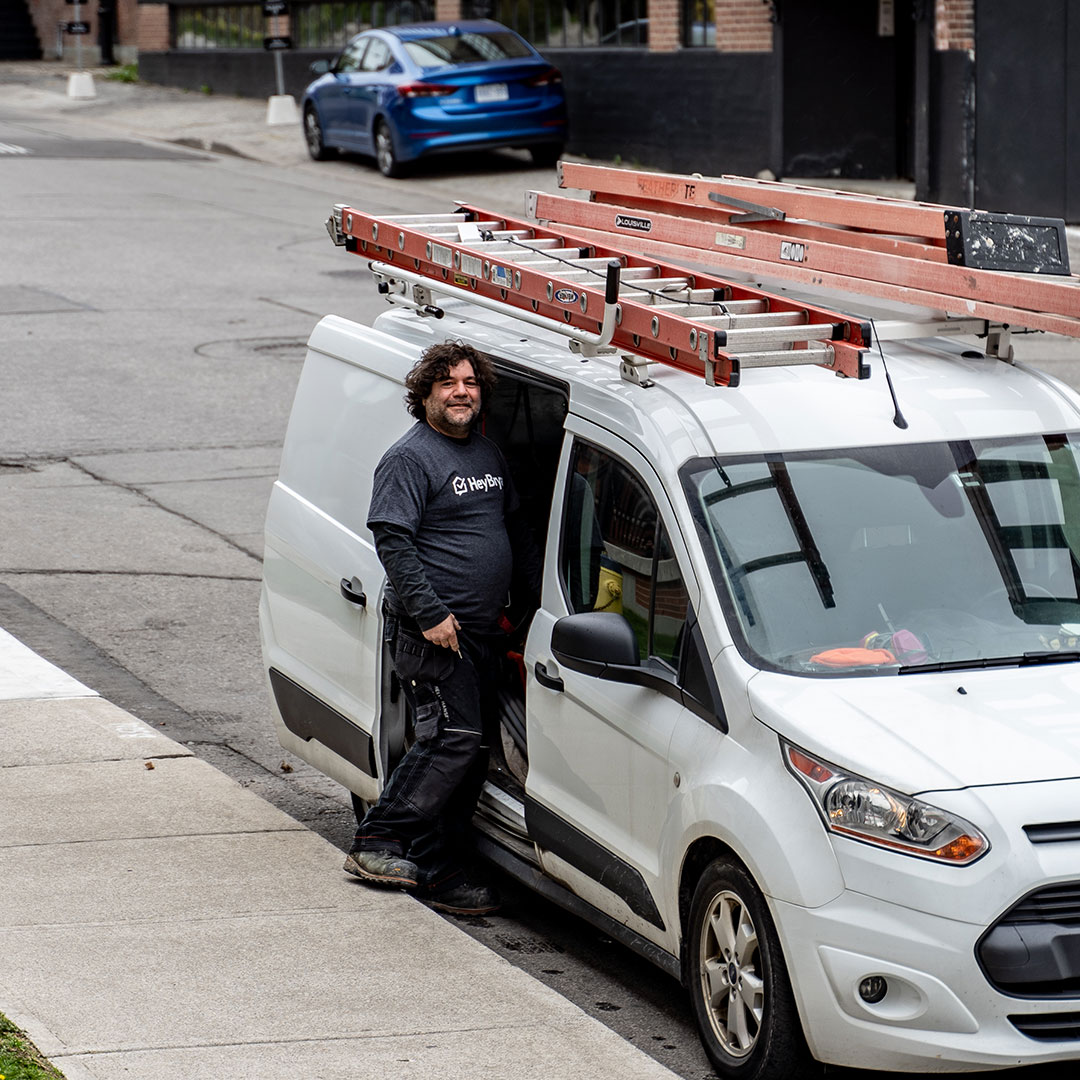